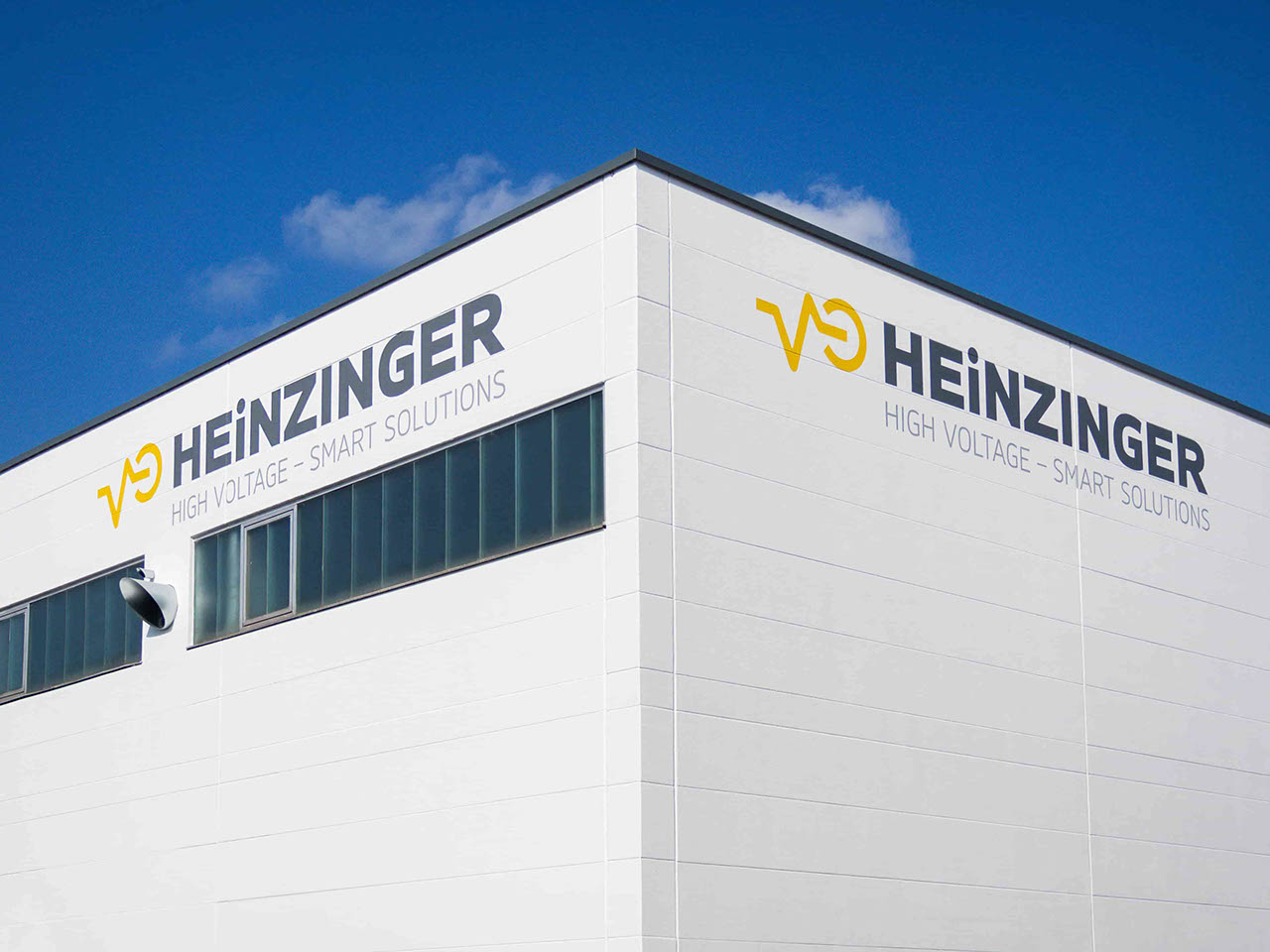 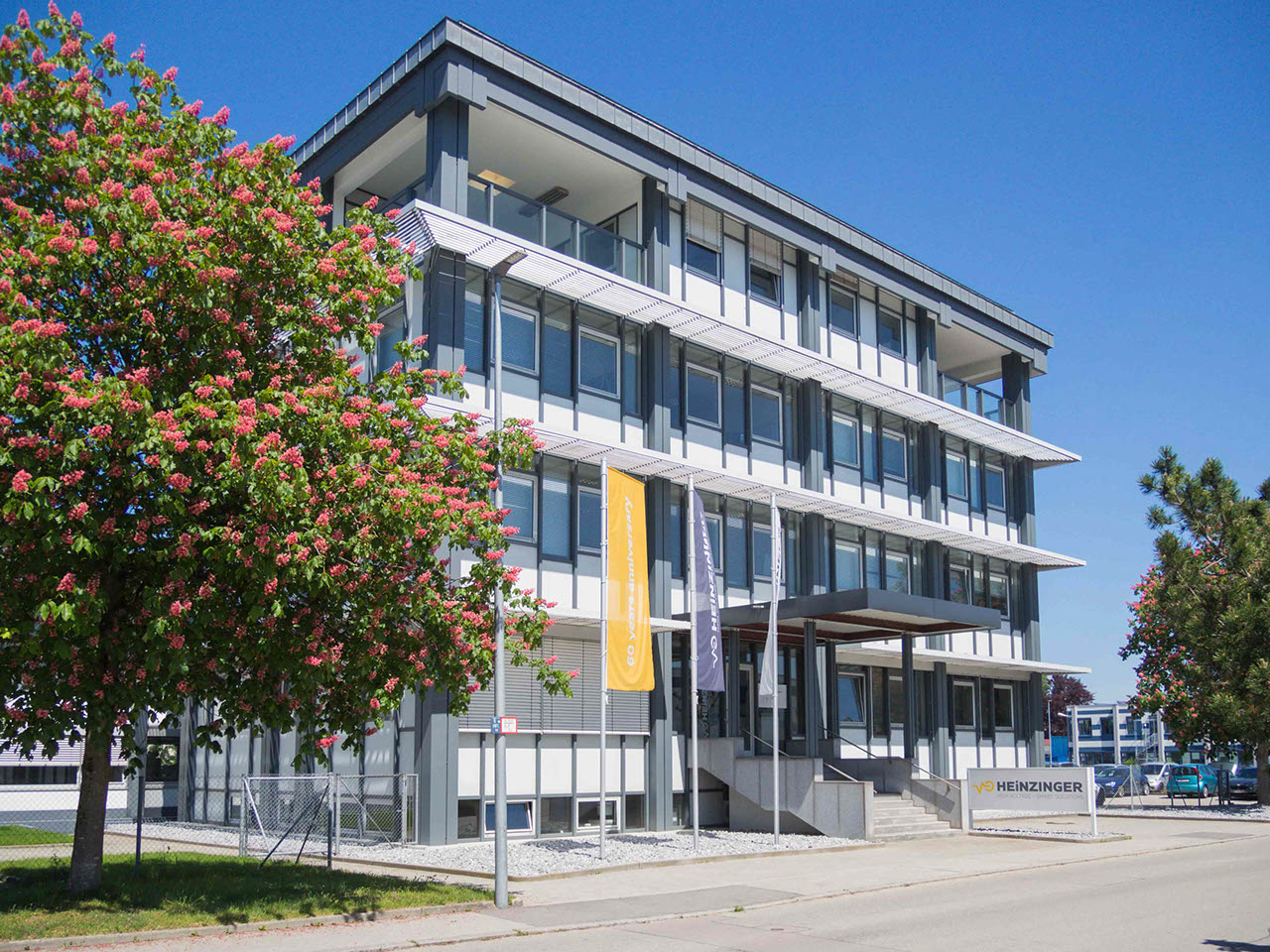 Whether for power components in electromobility, high-voltage batteries in the EV and HEV sectors, for testing of high voltages up to 300,000 volts or for the control and deflection of particle beams by accelerators and magnets: the high-performance and high-precision power supply solutions and DC power supply units from Heinzinger electronic GmbH in Rosenheim enable reliable usage even under extreme conditions. Since such specialised high-current and
high-voltage components generate a lot of waste heat, they need to be cooled continuously. Heinzinger was therefore looking for a contemporary and reliable solution for cooling a new production hall as part of a company expansion in 2019. An air-cooled chiller from Daikin with a scroll compressor and an output of 200 kW is used, which for the first time works with the climate-friendly refrigerant R-32 and is characterised by optimal operating behaviour and high energy efficiency. Compared to systems using the conventional refrigerant R-410A, R-32 improves the CO2 footprint by up to 68 percent.

With some 100 employees, Rosenheim-based Heinzinger electronic GmbH develops, manufactures and sells high-current and high-voltage power supply units for various industries worldwide and is thus synonymous with high-quality and high-precision power supply solutions. The DC power supply units from Heinzinger enable reliable usage even under extreme conditions. More than 800 high-quality units leave the factory every year to provide reliable and precise current and voltage in even the most demanding applications. Medical technology and research laboratories are just as much part of the clientele as are the mechanical and plant engineering, automotive and electromobility sectors, plus charging stations and test centres. Final tests up to 400 kV can be carried out in our own high-voltage laboratory. Since such applications generate a lot of heat, production and test benches at Heinzinger must be reliably air-conditioned.

When the company decided to expand production in 2019, it took over a 2,350-square-metre hall that was completely renovated. Since the test fields at Heinzinger have to be cooled with an open water circuit, a suitable standard solution was not easy to find. In addition, such a system is usually dependent on service from the respective manufacturer. Environmental awareness and impact assessment are important components of the corporate philosophy of the medium-sized company from Rosenheim, so from the very beginning Heinzinger placed great value on the most energy-efficient and environmentally friendly air-conditioning solution possible.

“Heinzinger electronic GmbH's task for us was therefore relatively complex. So I immediately contacted Mr Kamyshanskiy at Daikin,” explains Magnus Höß, Managing Director of Höß Kälte-Klimatechnik in Bad Feilnbach. “Together we developed a feasible concept which we presented to our client.” In applications involving open water circuits, close consultation between all parties involved is necessary due to water quality and external influences. At Heinzinger, a solution adapted to the customer was implemented, which offers the highest possible flexibility and operational reliability. Due to the above-mentioned requirements, the system design was proposed by Höß Kälte-Klimatechnik in cooperation with Daikin in such a way that, on the one hand, it is precisely designed to meet the customer's requirements and, on the other hand, allows interventions or adjustments in the control system at any time. The focus was on a Daikin chiller that reliably provides energy-efficient process cooling. With more than 150 different equipment options, Daikin chillers can be tailored to the specific application, environment and requirements. In this specific case, an air-cooled scroll chiller from the EWAT-B-XR series was chosen. It is characterised by high efficiency and a reduced sound pressure level. It was also the first air-cooled chiller with a scroll compressor on the market to use the
climate-friendly refrigerant R-32. 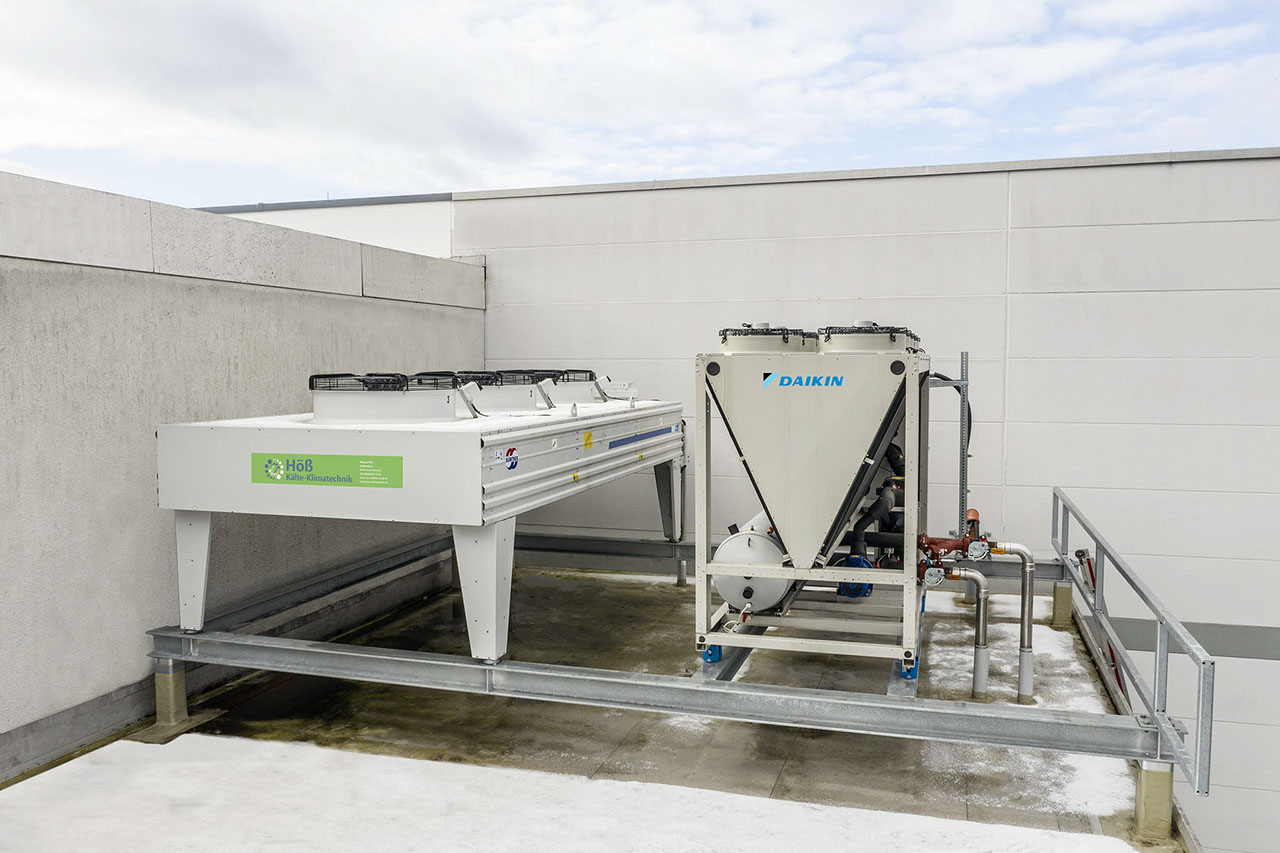 At Heinzinger electronic GmbH, the production hall and the rooms with the test benches are each fitted with an air-cooled R-32 chiller from Daikin with a scroll compressor (200 kW) and a passive cooler. © DAIKIN

The R-32 refrigerant has a Global Warming Potential (GWP) of 675 and thus a 68% lower global warming potential than the commercially available refrigerant R-410A with a GWP of 2,088.

Thanks to its favourable safety classification in terms of flammability – the refrigerant R-32 is classified in category A2L according to ISO 817 – it is suitable for many applications, including chilled water systems. Other climate-friendly advantages of R-32 are that it enables a 10% reduction in refrigerant charge thanks to the standard micro-channel condenser, and is a pure refrigerant that can be easily handled and also recycled.

Production and test benches must be reliably cooled at Heinzinger because the specialised high-current and high-voltage components generate a lot of waste heat. © DAIKIN

Höß Kälte-Klimatechnik carried out the complete installation including the piping in V2A DN65. Höß Kälte-Klimatechnik was also responsible for coordinating the measurement and control technology and electrical engineering for the power supply line. “Heinzinger placed great emphasis on energy efficiency when selecting the new air conditioning technology,” explains Magnus Höß. “The chosen Daikin chiller with R-32 has fulfilled all expectations on the customer's side in the best possible way. In combination with a passive cooler from Güntner, it was the best and most sensible solution for this demanding area of application.” Due to the relatively high level of the return temperatures, it was suggested to the customer that the passive cooler be very generously dimensioned (in this case with 5K). This means that a very high proportion of the output can be covered by the cooler throughout the year and the return flow can be “pre-cooled”. In practice, it has been shown that Heinzinger no longer needs the chiller when the outside temperature is 15°C or higher.

Because the customer is highly satisfied with the solution in the new, internally-renovated production hall, it has now also equipped the rooms with test benches in the existing building with an identical Daikin chiller. The old air-conditioning system installed in the 1,400 square metre building, which was prone to failure and consisted of a simple condensing unit with a plate heat exchanger (PHE) and no free cooler, was to be replaced with a new, modern cooling solution.

Thomas Staber, Head of Engineering & CAD + Project Manager Plant Expansion at Heinzinger electronics GmbH, summarises: “We are very satisfied. From the planning and implementation with Höß Kälte-Klimatechnik to the commissioning of the Daikin system, everything worked out wonderfully.”