Vienna, December 2018 – According to research undertaken over the past three decades, climatic conditions have become more extreme.*

Successor to the Daikin VRV III-C series and based on Daikin’s VRV IV platform, the new Daikin VRV IV C+ system has been specifically developed for heating operation in very low ambient temperature conditions. Delivering heating in temperatures as low as -25°C makes the unit suitable for single source heating. The unit also performs with less and shorter defrost cycles and shorter heat-up times compared to the standard VRV IV platform, making it a reliable alternative to conventional heating solutions.

Optimized to work at low ambient temperatures, the VRV IV C+ has been designed to maintain a stable heating capacity down to -15°C, representing a substantial uplift over the VRVIII-C series. Previously available in capacities from 10HP to 20HP, the range has now been extended offering capacities of 10HP to 42HP.

The ErP 2021 compliant VRV IV C+ is differentiated by the advanced design of its new K-type compressor, introduced to improve performance at low load.

This is achieved by the implementation of vapour injection technology. Whilst not a new development, Daikin has refined the technology with the new generation VRV IV C+ system. Vapour exiting the condenser passes through a heat exchanger and is injected in the compressor mid-cycle to deliver the effect of a two-compressor system, with a single compressor. A new spiral design with increased injection hole size offers an increase in vapour injection improving quality compared to other available systems.

A check valve has been introduced in the vapour injection mechanism of the new compressor to prevent back flow of refrigerant during low load operation; a common issue which occurs with market-standard vapour injection compressors.
In addition, a hot gas bypass circuit at the bottom of the heat exchanger prevents ice build-up to assist in maintaining high capacity operation, allowing up to five hours of operation between defrost periods.

Heat pumps typically operate at low loads of 50% or less for up to 80% of the time. Daikin’s improved VRV IV C+ raises the standard for energy efficiency when running at low load.

Typically, the movable scroll within the compressor is subjected to continuous pressure against the fixed scroll, with this pressure varying according to the system load. Decreasing pressure during low load operation can result in leakages from the high pressure to the low-pressure region. In the VRV IV C+ series, a new intermediate pressure port has been incorporated, which guarantees continuous pressure between the two scrolls thus preventing leakage and maintaining system efficiency.

The new compressor design also has a multiple balance structure, with balanced weights added to counteract the gas and centrifugal forces generated by the compression process.

The elimination of its previous function unit has reduced the footprint of the VRV IV C+ making the system easier and faster to install and configure.

With new larger capacities introduced to the series and connectivity across a wide range of indoor equipment, including indoor units for commercial and residential use, ceiling cassettes, ventilation units, smart controls and hot water/residential indoors applications, the new Daikin VRV IV C+ offers a total solution with unbeatable flexibility.

Daikin, a pioneer of the VRV technology which revolutionized climate control solutions when it was first introduced over 25 years ago, is constantly striving to find new ways of improving customer comfort and energy efficiency. The innovative new Daikin VRV IV C+ continues the tradition of future thinking, embodied in the highest standards of design excellence.

The Daikin VRV IV-C+ system is available to order from early 2019.  For more information see www.daikin.eu/VRVC

Daikin Europe N.V. is a wholly-owned subsidiary of Daikin Industries Limited and a major European producer of air conditioners, heating systems and refrigeration equipment, with approximately 6950 employees throughout Europe and major manufacturing facilities based in Belgium, the Czech Republic, Germany, Italy, Turkey and the UK.

Globally, Daikin is renowned for its pioneering approach to product development and the unrivalled quality and versatility of its integrated solutions. With more than 90 years of experience in the design and manufacture of heating and cooling technologies, Daikin is a market leader in heat pump technology. 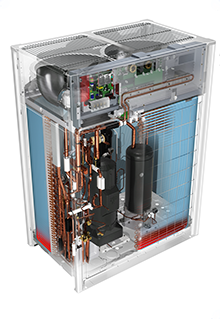 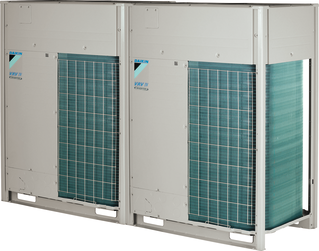